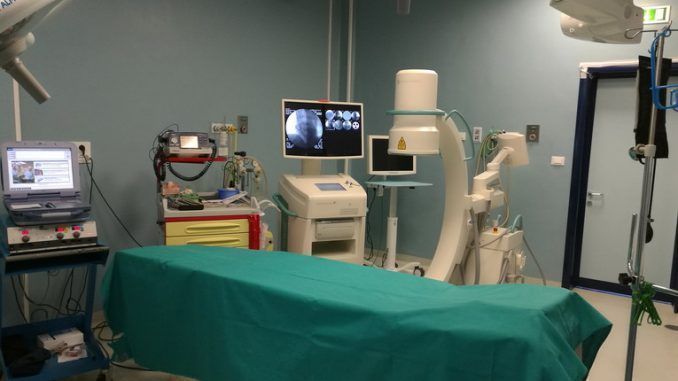 Cardiology and Hemodynamics at de’ Lellis: among the top three in Lazio in treatment of acute myocardial infarction

The Cardiology Unit of the de’ Lellis Hospital directed by Dr. Paolo Domenico Massoli, in 2017 distinguished itself in the areas of Inpatient, Outpatient, Electrostimulation and Hemodynamics, ranking among the top three facilities treating Cardiology and Hemodynamics in Lazio for timeliness in the treatment of acute myocardial infarction.

On the departmental activity front, discharges during the past year were represented by 970 ordinary admissions, 104 Day Hospital and 48 complex outpatient packages.

Cardiology and Hemodynamics, the De’Lellis flagship

The flagship of the Operating Unit is the Hemodynamics: This is a fundamental Service in the
Ensure low mortality from myocardial infarction. According to 2017 data compiled by the Program
Regional Health Interventions Outcomes Assessment (P.RE.VAL.E), the 30-day mortality rate
for Acute Myocardial Infarction, for the Rieti Hospital, was almost half of the regional average
(4.6% vs. 8%). The volume of patients with myocardial infarction treated was 271 (including 104 STEMI
and 167 NSTEMIs with or without vascularization): A figure that meets almost all the needs of
territorial intake of pathology. The overall volume of Hemodynamics activity has reached the
Remarkable number of 689 procedures: 314 coronary angioplasties performed, of which 78 were primary.

Growing trend also in the area of electrostimulation with 404 procedures activated including 301 pacemaker implants and 103 device replacements.

The Corporate Management of the Rieti Local Health Authority, with a view to strengthening and making the Facility more efficient, is evaluating the launch of pathways capable of treating severe aortic valvular stenosis and complex coronary stenosis and the activation of outpatient clinics dedicated to ischemic heart disease and arrhythmology, capable of further improving the management of patients after discharge from the unit.