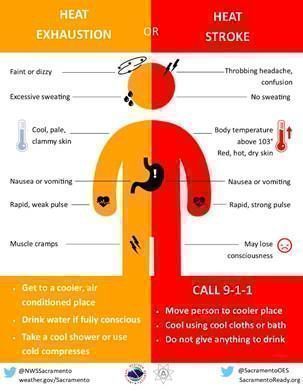 Heat strokes across l’Italy, tips to avoid them

Yet another and perhaps more tremendous seasonal heat wave is coming, and the Ministry of Health is reporting through its website on online services and tips to avoid or reduce heat-related issues, particularly targeting the most exposed segments of the population. Among all the elderly over 75 years old, chronically ill, young children (0-4 years old) and pregnant women to whom Giovanni D’Agata, president of the “Sportello dei Diritti,” calls for care and the utmost attention and care starting with institutions, especially local ones, which must monitor the area to prevent them from being left alone, especially the elderly who by choice or necessity have no other support but themselves.

Below is the statement that appeared earlier today on the Ministry’s website.

The entire first week of August will be characterized by above-average temperatures for the period across the country, with particularly high temperature spikes. The forecast of the national heat wave warning system indicates uncomfortable weather conditions, with health risks that will affect much of the national territory. Rising temperatures above the seasonal average may pose a health risk to the most vulnerable population – elderly over 75 years old, chronically ill, young children (0-4 years old) and pregnant women. In relation to this evidence we invite the competent authorities to want to take any appropriate initiative, useful to prevent and cope with the health effects of heat waves and in particular, to implement appropriate protective measures towards the categories most at risk and activate local prevention plans on the basis of the appropriate ministerial guidelines published by the Ministry of Health (Guidelines for the prevention of the effects of heat on health)

On this occasion, it is reminded that on www.health.gov.en/heat are available:

– the Heat Wave Bulletins of the 27 cities included in the National Heat Wave Forecasting and Warning System (operational from May 15 until September 15, 2017);

– a map of services activated on the territory in the summer by Regions, Municipalities, Health Authorities, in collaboration with voluntary social organizations, to help the population, especially the most fragile groups, such as the elderly and the chronically ill, to prevent and cope with the health risks of heat waves (Heatwaves – Map Services on the Territory).

– information leaflets aimed at the population, doctors, staff of facilities for the elderly, staff assisting the elderly (in 6 languages), indicating measures and precautions to be taken, including in daily behavior, to prevent the risks of the great heat, with particular attention to people most at risk.