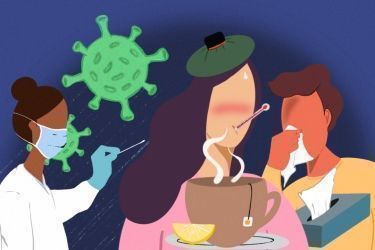 Flu season begins, here are the viruses in circulation

With winter just around the corner, it is inevitable to talk about the classic seasonal ailment: the flu. It is a cliché, but like all clichés it is real and should not be overlooked or underestimated. An estimated 500 million people in the world fall ill each year, accounting for nearly 10 percent of the planet’s population. In EU/EEA countries there are 50 million people a year while deaths associated due to influenza between are estimated by 15.000 to 70.000.

The virus is transmitted through microscopic droplets of saliva emitted by infected people through sneezing, coughing or even simple phonation.

Transmission is facilitated by close contact between people, as the virus has a high contagiousness. This high ability of the virus to spread explains why in one population the epidemic peaks only 15 days after the first cases occur. The infected person is able to transmit the virus from a few days before to 5-7 days after the onset of symptoms. The virus, once it enters the body through the respiratory tract, localizes in the epithelial lining cells of the first airways, within which it is able to actively replicate; the life cycle of the virus has a duration of 4-6 hours.

The newly formed viral particles then leave the cell, which goes into death, and are ready to go on to infect new cells, thus causing the infection to spread like wildfire. Afterwards, the intervention of the immune system helps to halt the progression of the infection, thus leading to recovery within a few days.

Experts from the European Union&#8217s independent agency, the European Centre for Disease Prevention and Control (ECDC), have let it be known that for this year they do not seem to be concerned about. Four different viruses are expected, highlights Giovanni D’Agata, president of the “Sportello dei Diritti,” which could arrive on Italian territory, but with an incidence in the average of the past years. Much will depend on the weather, but about 3-4 million Italians are expected to end up in bed with the least desired of companies.

One is not new, it is the California A/H1N1 virus that has been circulating since 2009, the others are variants of viruses that were already circulating in past years namely A/H3N2, B/Pukhet and B/Brisbane. To these then must be added more than 200 rhinoviruses, adenoviruses and coronaviruses that produce symptoms similar to the 2016 flu viruses but are not considered influenza viruses.

The consequences will mainly be fever, cold and stomach ache or other gastrointestinal symptoms that are estimated to affect up to 8 million people. The period most at risk will be, as always, after Christmas when a mix of low temperatures, after kisses and hugs between relatives, will accelerate the spread of flu viruses. The difference between flu and non-flu viruses is that in the former case the fever comes suddenly, is above 38 degrees and is accompanied by muscle and joint pain, sore throat and cough. It is periodically one of the leading causes of absence from work, medical consultation and hospitalization; in Italy it is to date with 8000 deaths a year the third leading cause of death from infectious diseases, preceded by tuberculosis and AIDS.

The most affected patients will be infants and those over 65 years of age: these are in fact the population groups with respectively undeveloped or debilitated immune systems, who are therefore also at risk of developing complications such as pneumonia and/or bronchitis. Specifically, 40% of those who will be affected are predicted to be under 18, another 40% between 18 and 65, and only 20% will be over 65, although for them the flu could bring more serious consequences than for those who are younger and healthier.